skip to main | skip to sidebar

Are We Really Doing This Again? 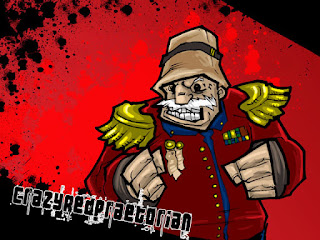 What the hell has happened and where have I been? I have been playing 40K. What about you? Unlike a lot of people, I never left the hobby. It never left me. I have been playing and hobbying. I just have not been blogging. It was feeling forced and I felt like I was on a schedule. Also, I took a bad ass new job that takes up a lot of my time. 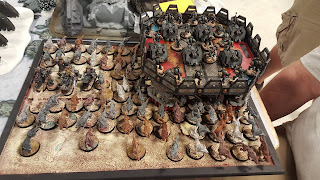 (75 wolves, Azrael, Librarius Conclave, and 6 Quad Mortars. Some one is going to get butt hurt)

I'm off to do another Battle Report tonight against Adam from Nights at the Game Table and whatever he brings. We are playing at my buddy Ryan's house on his killer terrain. I'm looking forward to it.

Go Roll Some Dice!!!
Posted by Crazy Red Praetorian at 8:39 AM 3 comments: 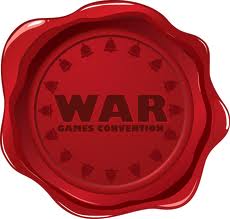 Hey Folks! WarGamesCon is just around the corner, June 22-24 here in Austin Tx. If there is interest, I would like to put together a Praetorian vs Ork Big Toof River Apocalypse game on Saturday evening the 23rd after the Saturday Tournament. So, I need all of my fellow Praetorian players to chime in if you can make it. It will only take a couple of us to make this happen but the more Pith helmets the merrier! So, please if you are interested email me crazyredpraetorian@gmail.com or post here and let me know.﻿

Also, this year I will again be playing the III Praetorian Rifles in the giant WarGamesCon 2000 point Championship. I've been tweaking the list and I think it is ready for battle! I'll be painting all day today in preparation for next weeks Alamo 40K GT. That event is always a lot of fun. Then Railhead Rumble in Dallas in early June and the BIG event WarGamesCon in late June!!! Pith helmet madness indeed! I do love tournament season.﻿ 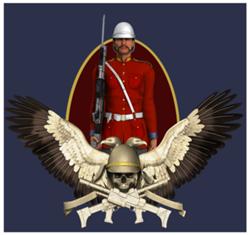 Adepticon: Tickets Are Bought, Flight and Room Are Booked!!!

Well, I just booked the flight to Chicago. Awesome. It looks like I will finally get to Adepticon. I'm playing in the Team event with BigRed, CrusherJoe, and Splug. It should be epic! I'll also, be playing in the GT. This is the third year that I have tried to go and it looks like the third time is the charm. The best part about it is my son is coming with me. He is super excited and looks forward to playing in the Young Bloods event. Its also his first time flying in an airplane. 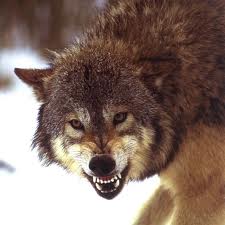 I'll be playing Space Wolves, the damned IG are just too hard to transport. I think, I've got  a fun and different list put together. I need a break from work and this is going to be FUN! 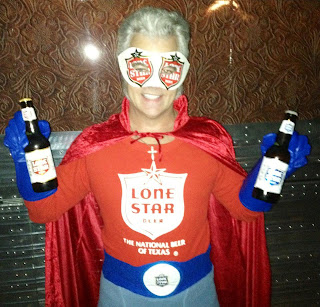 Maybe Lone Star Man will fly in, too. You never know.  I gotta go paint!

Well﻿, I made it back from Astronomi-con. the road trip was bit more cramped than planned. I thought the 4Runner would be ready but, it wasn't. So, Hogleg, Ace, my son and I all piled ourselves and our armies, display boards etc, into my Mustang for the 3 hour drive to Dallas. Wiley One and his bride to be were kind enough to open their home to us for the weekend.
We got up and got our army list printed up. It's funny how every damn road trip we all need to print our lists the morning of the tournament. Wiley One scored us some donuts and we raced out the door to Tournament. We got there with time to spare for a change. Right away, I knew something was different about this tournament. The terrain was different on every table. Once I set my army up on my display board I walked the room and noticed that there were a bunch of cool armies in this event. Sorry, I didn't grab any pictures because my camera still sucks...it will always suck. I need to break down and get a new one....damn.
I brought the following list:
Wolflord on a Thunderwolf, Runic armor, SS/Frostblade, Wolf tooth Necklace, Wolftooth Talisman, 2 Fenrisian wolves. and Saga of the Bear.
Wolflord on a Thunderwolf, Runic armor, SS/TH, Wolf tooth Necklace, Wolftooth Talisman, and 2 Fenrisian wolves.
Dreadnought with Wolf tooth Necklace and a Lucius Drop Pod(that's right! IA was allowed!)
WolfGuard x5, PA x4, TDA x1, 2x PF, 3x Combi-melta, 1x Combi-plasma, 1SS/TH Drop Pod
Grey Hunters x10: 2x Melta Drop Pod
Grey Hunters x7: Power Weapon, MotW, Wolf Standard, Melta gun Rhino w/ Dozer blade
Grey Hunter x 5: Razorback w Heavy Bolters ans Dozer Blade


DAY ONE:  Game One: I played an Ultra Marine themed Khan bike army. The mission had some crazy reserve rules and I managed to get the win. Great opponent and a great start.
Game Two: I was matched up against Cory's Eldar. Cory and I played against each other at the Alamo GT last year and he got the win. This time I came out on top. 2 great games so far.
Game Three: I was up against Jackson's  Warrior heavy Dark Eldar w/a fighter and a bomber. Typically, I struggle with DE against SWs and this was no different it was a tight nail biter of a game but I ended up with the win. 3 great games out of three, two being extremely close, crazy scenarios, and killer terrain. I am loving this event!
We loaded up the car and went the Dallas Mardis Gras for free beer and BBQ, courtesy of Wiley Ones super sweet fiance. After getting our fill of BBQ and beer we headed over to Gunslinger Games. Hogleg had set up a game with Keith one of the organizers of Astronomi-con, I filmed it for a future BoLS Battle Report. Gunslinger Games is a new store that has something different.....old school Battle Tech Pods. If you've never tried these out, do yourself a favor and find some near you. 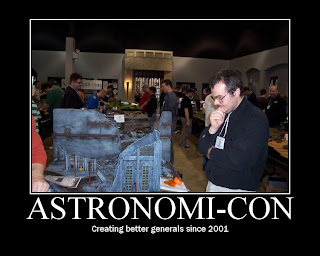 DAY TWO:
Game Four: I was paired up against Sandman Mike(one of the Heroic 28s) and his Grey Knight List. *sigh*...it was a great list but Mike just stomped my puppies. My first loss of the event and it was a trouncing. But it was a fun and challenging game. Mike ultimately took Best Overall.

Game Five: Kill the Baneblade(a Great mission BTW) against Grey Knights (Le Sigh as Pepi Le Pew would say). However, the mission worked in my favor and I managed to get a solid win. My opponent was a great opponent. So, 5 great games out of 5.

Game Six: was against Spellbound's Emperor's Children. We were on the city fight board, a beautiful piece of terrain but tough to play on. I made 3 major mistakes in this game and my opponent played very well squashing the wolves and getting Best General for the weekend. Another great game making 6 out of 6 a blast!

To top things off I ended up with 28 out 30 points for Best Appearance. I was one happy camper! I can't recommend Astronomi-con highly enough. A great big thanks to the Astronomi-con crew! I really needed to go to an event like this to get revitalized and get my hobby juices flowing. We ended the day with a great dinner at Babes, a wonderful home cooking restaurant. Outstanding chow! If you're ever in Dallas check it out.

Two tournaments coming up in March and then 2 more in April....and Adepticon. WOOHOO! 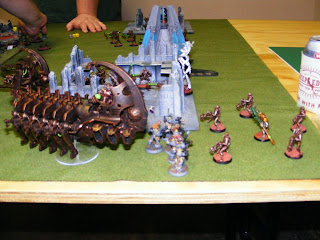 Well, I played in two tournaments last weekend and am attending Astronomi-con in Dallas this weekend. I'm writing this while I'm waiting for my drop pod to dry. Lots of painting to do before Friday.﻿ 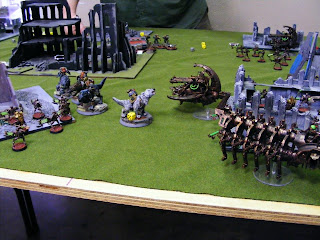 Last Saturday, I attended a local 2000pt tournament at Wonko's Toys and Games. It was a blast, the Wonko's boys have stepped up there game a bit in the last year﻿ but the atmosphere was still nice and friendly. Game one I played  a chaos army and ended up with a massacre. Game two, was against Necrons and ended up with a minor win. Game three I got trounced by a Grey Knight army on table one.
As I said it was a blast and I brought TWC,sky claws, 3 squads of GHs and one squad of LFs...oh and Scouts! I didn't end up placing but it was a great time. Thanks to Frank for running things and taking these pics. 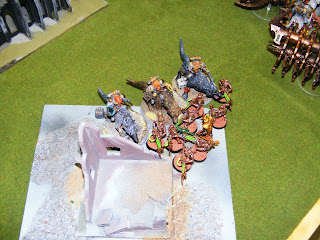 Sunday I played a mentor team event. My partner was my 13 year old son, we went 1-1-1 for the day. All of the young players received gift certificates. Thank you Dragon's Lair for another great event.﻿ 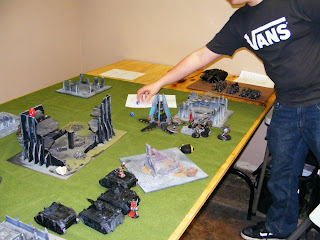 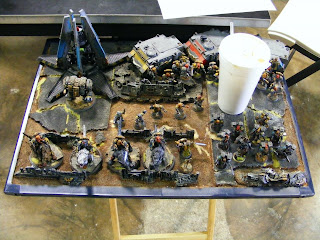 ﻿  This Friday a few of us are traveling north to Dallas for two days of hobby fun. I'm bringing the Wolves again with a nice new Forge World goodie. Speaking of...back to the painting table.
Now Go Roll Some Dice!!!
CRP
Posted by Crazy Red Praetorian at 7:57 PM No comments:

Hey guys and gals, I am fired up about Adepticon 2012! Last night my teammates CrusherJoe, TheGirl, BigRed and I were bouncing ideas back and forth for the Team Tournament. This is going to be SO MUCH FUN! I'm signed up for the championship tournament, as well. I think I am bringing Space Wolves as they will be easier to transport. No lag wagon this year to carry armies...DAMMIT! The IG army is just too bulky to transport on the plane.

My 13 year old son is playing in the Young Bloods Tournament. He is really excited about this event and wants to get his Necrons perfected for the tournament. Back to Christmas shopping!

Now Go Roll Some Dice!!!
CRP
Posted by Crazy Red Praetorian at 10:18 AM No comments:

﻿
Well, it's 130am and I have just completed﻿ models for tomorrow's Team Tournament. Why do I do this every damn tournament? I am playing 1500 pts of Space Wolf goodness and Crusher Joe is Bringing GKs. It should be fun. I've got to get some sleep.....really.
Go Roll Some Dice!!!
CRP
Posted by Crazy Red Praetorian at 11:29 PM 3 comments: